On this leg of the trip, we left Killarney and visited Muckross House, a beautiful stately home in Killarney National Park. The house has been restored to the way it was in the late 1800s when Queen Victoria stayed there. Unfortunately we were not allowed to take pictures inside the house, but we have many pictures of the outside of the house and the beautiful grounds. At the time it remind me of the Breakers (in the US) – not so much in the architecture of the house, but in the grand style of the rooms and the extensive grounds.

View from the house 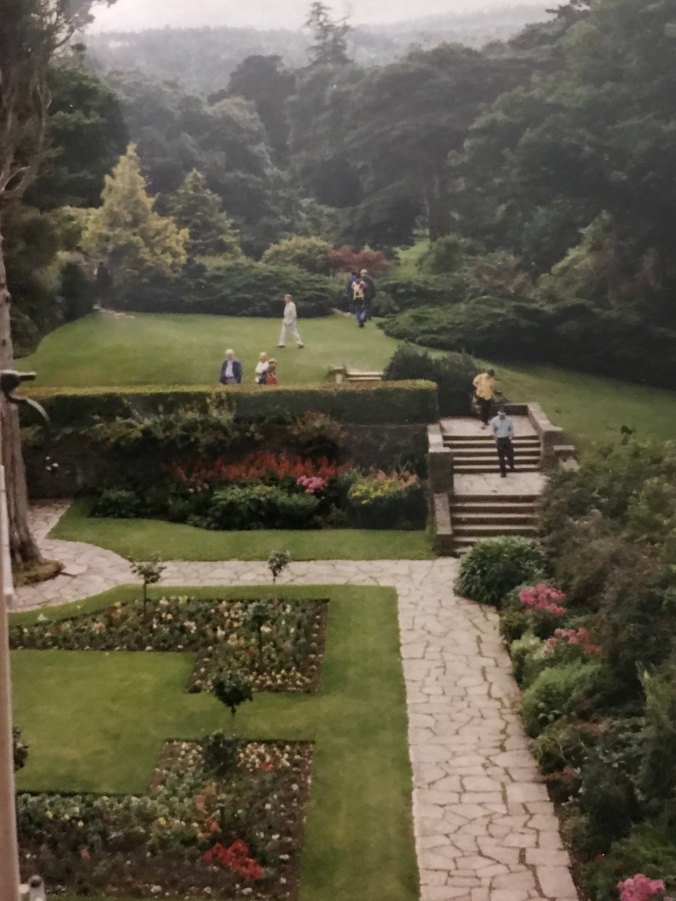 After leaving there, we drove along the coast for a while and having lunch in Dingle (where I had my first “lamburger”) and then took a ferry to cut nearly 100 miles off of our trip as we headed toward the Cliffs of Moher.

Few places are as iconically Irish as the Cliffs of Moher. I have been fortunate to see them multiple times in my journeys to Ireland. Both in the “shadows” — or fog, and the sunshine. My first trip to the cliffs in July of 1997, they were shrouded in fog so dense you could barely make them out.
I was beyond disappointed, to say the least. I’d learned that an infamous scene of my favorite childhood movie, The Princess Bride, was partially based off of the Cliffs of Moher — in the movie they are called the Cliffs of Insanity. Consequently, I was so excited to see them in person. But as you can see from the pictures below, there were barely any cliffs to make out.

It was a rainy day, and the fog was incredibly dense. However, we did walk around a bit and took some pictures with the realization that the trip to the Emerald Isle was going to be hit or miss with fog. I was disappointed, however, that it had descended on that particular day.

Afterward, we drove to our bed and breakfast for the night – Berry Lodge, which (at least as of 2018) is still in operation, according to Trip Advisor. The accommodations were extremely comfortable, and view surrounding the house was stunning and remote.

The women who ran the bed and breakfast were sisters and were incredibly kind! We ate dinner there, and when they found out that this trip was a graduation gift for me (read more about that here if you are new to the blog), they baked me a cake in celebration of my graduation. It was incredibly touching. And though I don’t remember how it tasted, I remember how the women made me feel – loved and appreciated.

We told the ladies about our sadness having not truly been able to see the cliffs, and she mentioned that we should try again the next day because “everything could be different of a morning.” Well, we took their advice and went back the next morning, and they were right! The sun had cleared away the fog, and it was a beautiful, sunny, warm day.

We enjoyed walking along the trails (as far from the edge as humanly possible, for me).  Climbing on rocks, and posing for a zillion pictures, we spent a large portion of the day there when the day before we’d only spent a few hours. The biggest surprises for me were that there is almost no barrier between the trail and the cliffs and that it is incredibly windy. There were a few gusts that I worried would push me right over the edge!

My parents went up in one of the observation towers. I, of course, kept my feet firmly planted on the ground and walked around at the base of the tower instead. 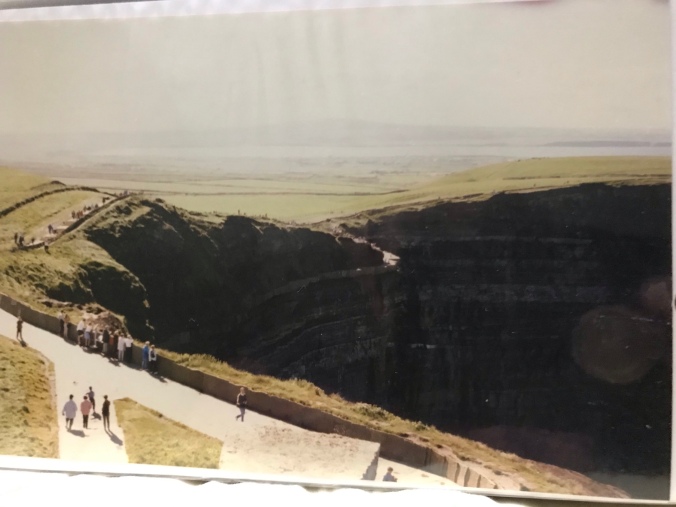 As a self-proclaimed anti-touristy person, the cliffs are definitely worth seeing despite the crowds you will encounter. Just be careful on the trails and take care when being “daring.” Especially in today’s “selfie culture,” people often don’t pay close enough attention when attempting to get the perfect shot. I assure you, there are several places that are very safe and offer amazing pictures.

I was at the cliffs roughly a year ago, and I learned so much more about everything the cliffs have to offer, but you’ll have to come back when I do a series on that trip. As a teaser, I did run across a picture of me in 1997 that is in nearly the same spot where one of my co-workers took a picture of me in 2019.

The rest of the blog posts in this series:

Kenmare and the Ring of Beara

From the Disappointing to the Magnificent