After several days in Arizona, we were finally headed back to Las Vegas to fly home. The flight from Vegas was much cheaper than Phoenix, but it required a much longer drive. However, there was the up-side that we could stop by the Hoover Dam and Lake Mead.

We didn’t have a ton of time, so we didn’t go into the museum because there was an entrance fee and we knew that it really wouldn’t be worth it for the amount of time we could spend there. However, if you have time, I’m sure the museum is quite lovely.

We did spend a little walking around and looking at what we could. Gabriel had lots of questions and my dad spent some time explaining a few things about the impressive structure in a way that my young son at least pretended to understand.

For those of you who don’t know about Hoover Dam, I’ll help explain some of the history to you.

The construction of the dam was of such a magnitude that nothing like it had ever been done. Over 100 people died during the construction, and it took only five years to complete it (two years ahead of schedule). 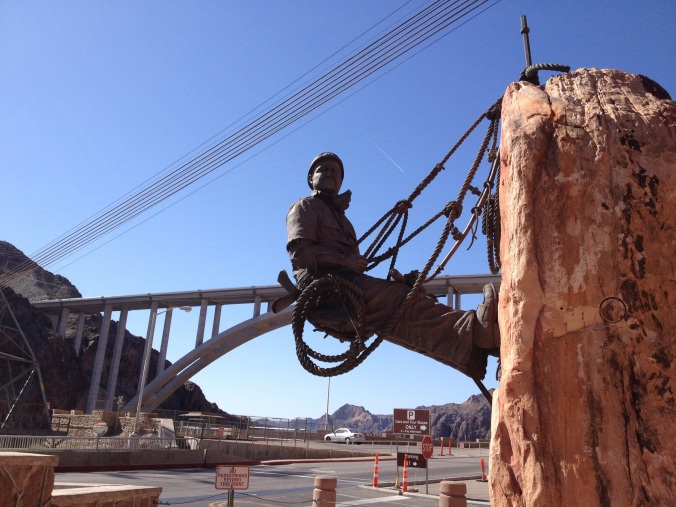 The dam was originally called the Boulder Dam because it was proposed to build it in Boulder Canyon (it was then actually built in Black Canyon). There was talk about naming after President Hoover (the sitting President at the time); however, he was not a “favorite” President… what with the Great Depression and all that. Consequently for a while people called it both until the 1940s when it was approved to officially name it Hoover Dam despite the running joke that it might leave the country high and dry like its namesake.

The reason the dam was built was for hydroelectric power, as well as for irrigation to the surrounding area. Another interesting fact  is that until 2010 you could drive over it on your way out of Vegas until they built the bypass. The bypass led to a much more direct path across the Colorado River. Looking at it from the air, it’s kind of a no-brainer.

Though we were a bit disappointed in not being able to go into the museum, we were very ready to start the final leg of our trip home to Indiana.

Next week we’ll take a break from my adventures with my son and I’ll tell you about my road trip to the American West (at least west of Indiana).

If this is your first time to the blog – check out my other adventures as a single mom with my son!

Driving around the Grand Canyon (Day 3)

There’s more than a canyon in Arizona!