On our two week trek around Ireland, we found many interesting sites both planned, like Dublin, and unplanned, like Powerscourt. And after the “high” of Glendalough, I didn’t know if our trip could get much better, and we’d been in Ireland less than a week. 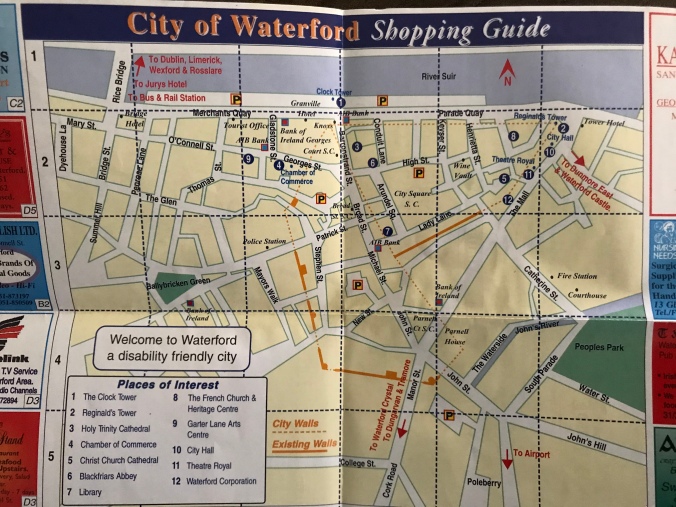 The 1997 tourism map for Waterford

The next stop on our trip was scheduled to be Waterford. We actually spent the night there the evening we left Glendalough. Our accommodations for the night were Diamond Hill Inn (now Diamond Hill Country House). I honestly remember nothing of this bed and breakfast, so I’m sure it was not terrible, but not as memorable as some of the other places we stayed.

That evening we didn’t get much of a chance to explore other than eating dinner. In my journal I wrote about how nice the restaurant was, but since the idea of public journaling (essentially what blogging is) was not even a glint in my eye in 1997, I didn’t anticipate ever wanting to know the name of the restaurant again. Consequently, though the food was amazing, all I know is that it was somewhere in Waterford.

The next morning we hopped over to the Waterford Crystal Factory. 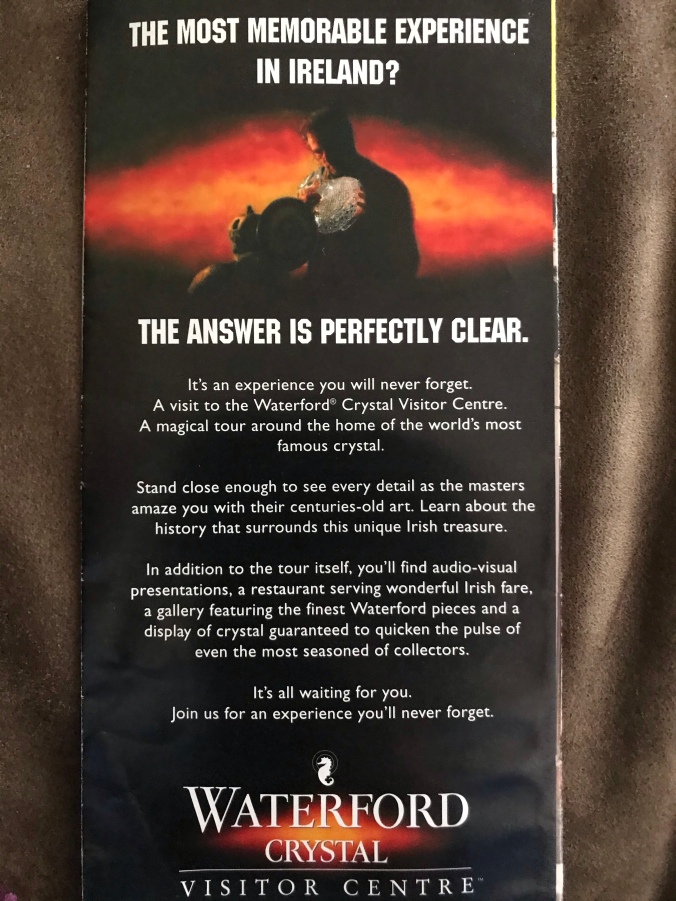 For those of you who are unfamiliar, Waterford Crystal is internationally famous for their plethora of famous additions to our culture. Probably the most notable item to the majority of people would be that Waterford Crystal makes the “ball” that drops in New York City on New Year’s Eve. However, they are also responsible for chandeliers in some amazing places like Windsor Castle (London, England) and the Kennedy Center (Washington, D.C.). Waterford Crystal also makes everything from paper weights and vases to the statues for the People’s Choice Award winners.

We spent about two hours at the factory going on a tour and then ogling the showroom where you can buy things for between (at the time) £4 to £10,000 — side note: Ireland didn’t change to the Euro for another four and a half years. We had a lovely time, and even teenage me didn’t mind touring the crystal factory where you get to see all kinds of methods for shaping and engraving the crystal. It was actually quite fascinating. I highly suggest taking a tour and checking out the showroom and all of the beautiful things you could never possibly afford, and then buying something a bit more modest.

Waterford has much to offer. For one, it is the oldest city in Ireland. According to Ireland’s tourism website, the Vikings developed a settlement there over a thousand years ago. However, my cousin Tom would insist here that I clarify the term. “Viking” was originally a verb – to travel or to be a part of a traveling expedition. The term was then applied as a noun meaning people from Scandinavia who went viking. (How’d I do, Tom?)

Nevertheless, Waterford got it’s name from Old Norse Veðrafjǫrðr, which means “ram fjord”. However, the native Irish eventually took the city back, and then eventually the British wanted to stake their claim as well. It is a beautiful place with a wonderful port that is well situated to defend, so it is no wonder it was a contested location.

After we left Waterford, we traveled south and west to Dungarvan, another beautiful costal city. 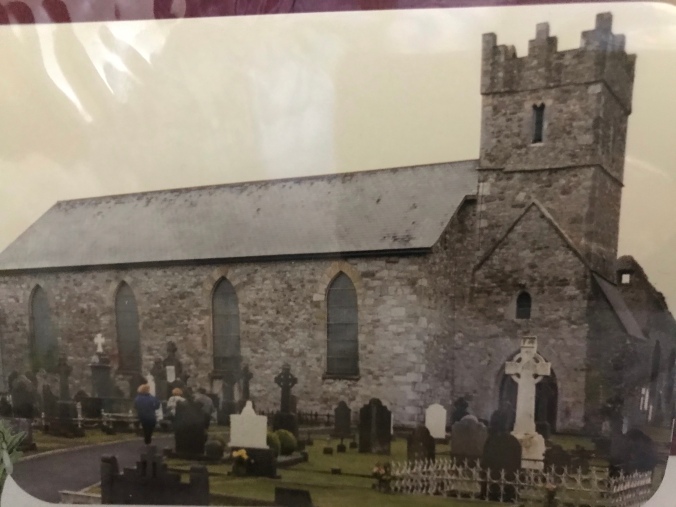 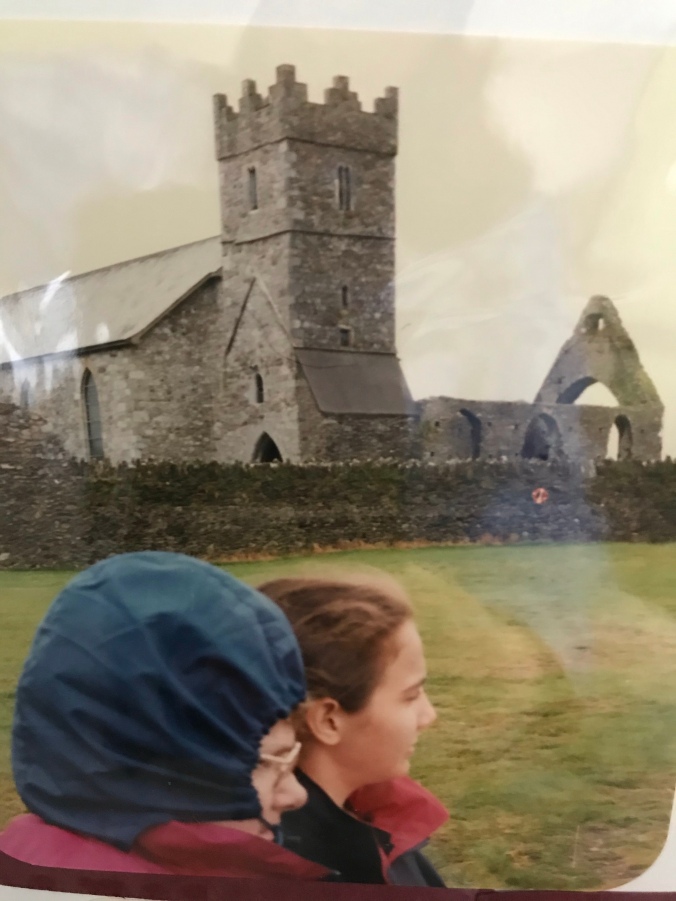 The wind and rain pelted us as we got out to look at the beautiful St. Mary’s Church of Ireland. The ocean was dark blue and incredibly intimidating as the waves crashed long the stone wall around the church. As I would later realize was a common theme in much of Ireland, Dungarvan was both beautiful and intimidating. 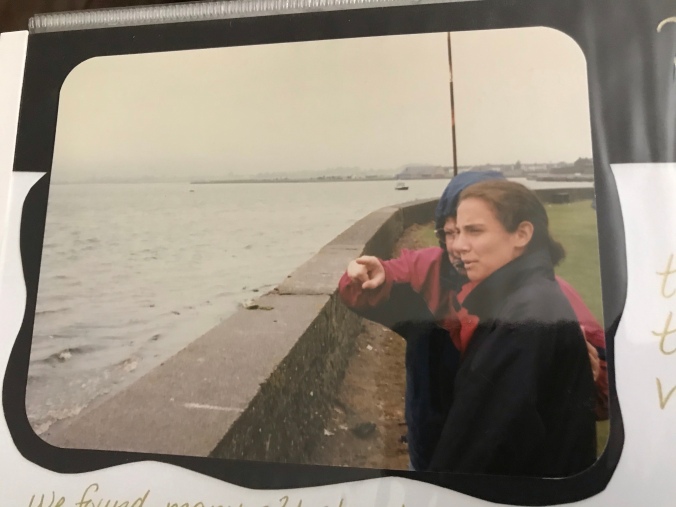 After a quick look at names on tombstones, we hopped back into the car and drove a bit further west to a town called Youghal. Also a port city, Youghal was also commandeered by the Scandinavians as a base when they would go on raids along the south coast of Ireland.

My favorite thing about Youghal was the pub where we ate. I checked online just before  writing this, the pub still exists – Moby Dick’s –

It was a cold and rainy day and we had quite a bit of fun there because the pub owner was trying to have a conversation with my father, and my dad simply could not understand his accent. Though, I’m sure time has rounded the edges of my memory, I remember a conversation something similar to this:

(something unintelligible from the owner)

Dad: I’m sorry, what was that again?

Owner: What language do ya speak?

Owner: (laughing) Well, ya haven’ a prayer of understandin’ me then, have ya!

We all laughed, and somehow conversation became a bit easier – perhaps the owner knew to talk slower and louder for our benefit. We had a glorious meal, and the sun came out for us for a while so that we could walk along the port and see the vessels in the harbor.

After leaving Youghal we continued to drive and came upon some very typical Ireland- beautiful vistas, sheep, and even peat marshes! 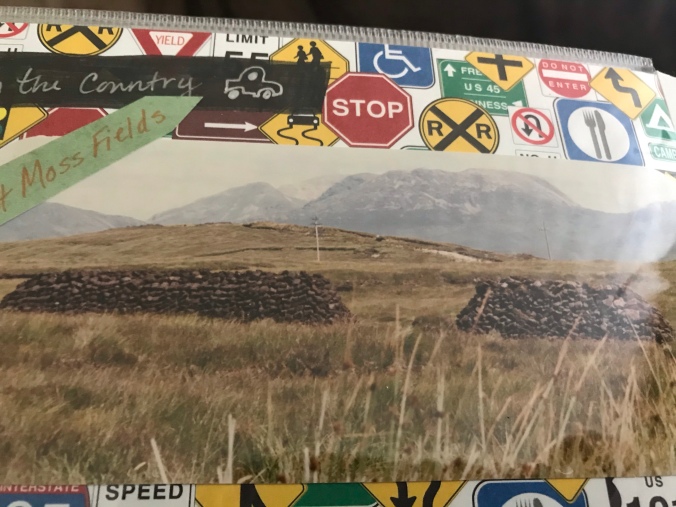 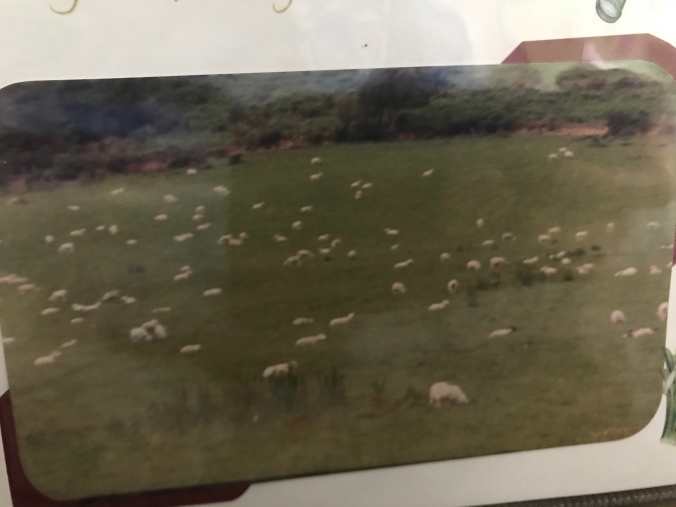 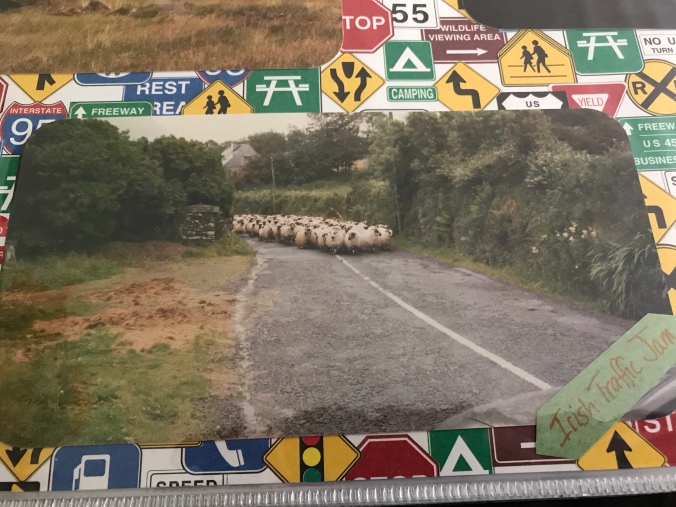 Since the road was completely blocked with sheep, we stopped and the sheep parted around us, jumping and baa-ing loudly. It was hilarious!

This was all-in-all a lovely day trip. It was only two hours of driving between Waterford and Blarney where we ended up staying that night– but you’ll have to wait until next week for the blarney on Blarney! 😁

Other posts for this trip: