The last few weeks of my blog have been highlighting a trip I took with my son and my mother to the Grand Canyon. The first few days of our adventure were taken-up with the joys that the canyon had to offer. Honestly, you could spend weeks there and still not see and do everything you want to. We focused our trip around the south rim of the Canyon because that is where most of the ranger stations and lodges are, but there is LOTS to see around the north rim as well. I hope to be able to go back some day and go up there instead.

But four days into our trip, we decided to see more of what Arizona had to offer! There are so many National Parks, Historic Sites, etc. all over the Southwest, but since my son was still relatively young,  we stayed “pretty close” to the Grand Canyon for our adventures.

In our research for the trip, I decided to let Gabriel pick some of the places that we would go see. The first place he wanted to visit was Montezuma Castle National Monument, so that’s where we headed first.

On the road to Montezuma Castle

I think I said this in an earlier blog, but the thing that surprised me the most about rural Arizona is how beautiful the desert can be. I honestly did not expect to be blown away by the rugged beauty of Arizona. I’d been to Arizona before, but the city (Phoenix), not out in the middle of nowhere. The browns and reds and greens and the blue of the sky create this magnificent palette of colors that I’d never seen in my other travels.

My son is a bit of a know-it-all when it comes to things he loves, and Gabriel was OBSESSED with the National Park Service at this point in his life. I kept accidentally calling the monument “Montezuma’s Castle” (because as an English teacher, that makes more sense to me), so he corrected me a few dozen times while we were out there.

For those of you who have never been, Montezuma Castle is a cliff dwelling perched high into a cliff face that had to be accessed through retractable ladders. Very cool! 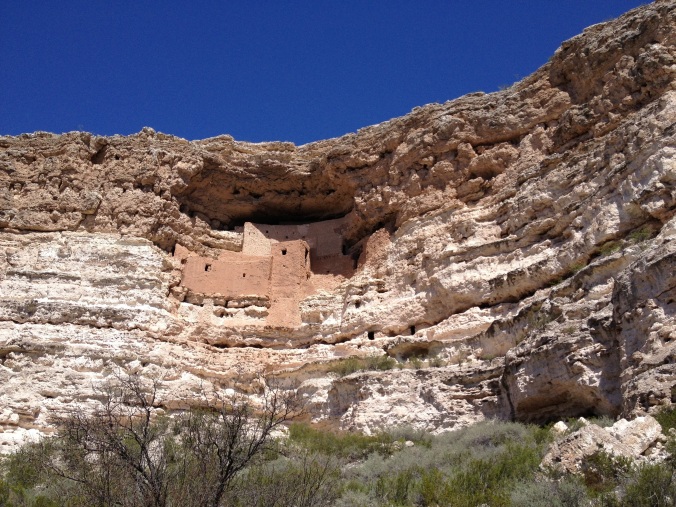 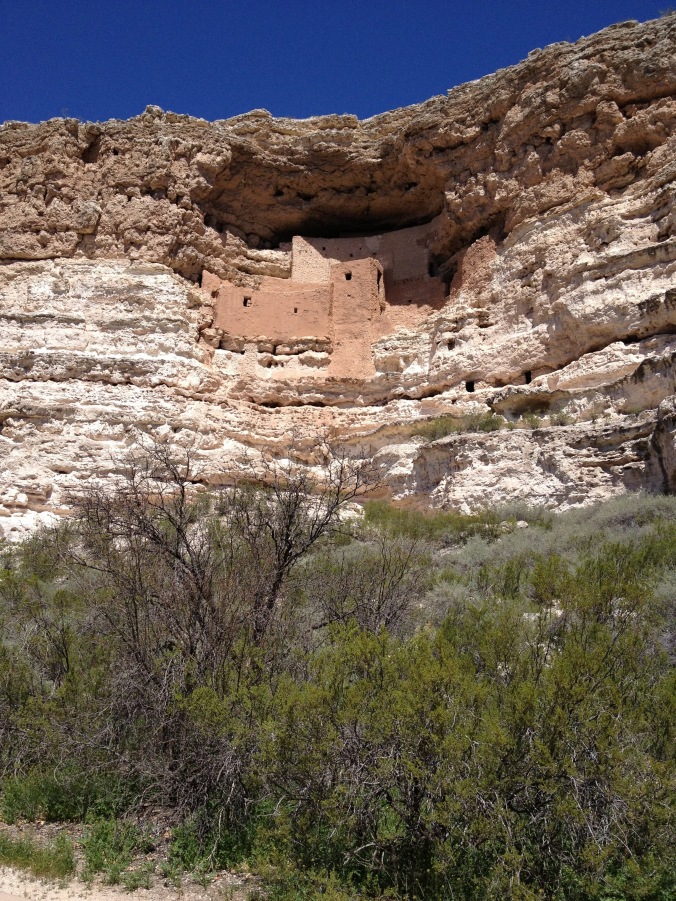 Close- of some of the rooms closer to the ground

The “castle” isn’t really a castle… and despite the name, it has NOTHING to do with the Aztecs or Montezuma. Interestingly, it got its name from a faulty assumption that it had something to do with the Aztecs, when it was actually left vacant quite some time before Montezuma was even born. So it’s name is very inaccurate, but … hey, we do what we want here.

The castle is a five story complex of interconnected rooms and, according to the National Park Service information, it was constructed over about 300 years (different additions added on over time). Unlike some other cliff dwellings in the American Southwest, you cannot go up to Montezuma Castle. I thought Gabriel would be upset by this, but he couldn’t have cared less! He loved walking down the paved path and looking up at the impressive construction.

There are also a few replicas that you can interact with down on the ground that, for some reason, I didn’t get pictures of. It is definitely worth the trip from the Grand Canyon or Phoenix… or Indiana!

There is also a well near by that Gabriel didn’t care to go see, but a fellow blogger wrote about it recently – you should check out her post here —> (Gen-X Traveler).

More Cliff Dwellings Ahead… but first!

After leaving Montezuma castle, we drove through the beautiful Sedona, Arizona. It’s a lovely little town– very commercial, but still cute. It reminds me a lot of a desert version of Gatlinburg, Tennessee– a little kitschy, but still worth seeing. Honestly the area around the town is what you want to see. There are SO many hikes and so many rock outcroppings to lose yourself in (in a good way) that it makes the little town very worth it (just like the Great Smoky Mountains make Gatlinburg with it). 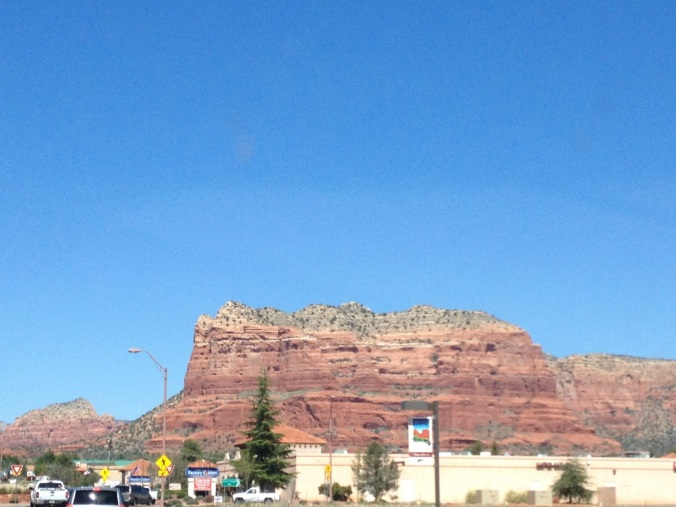 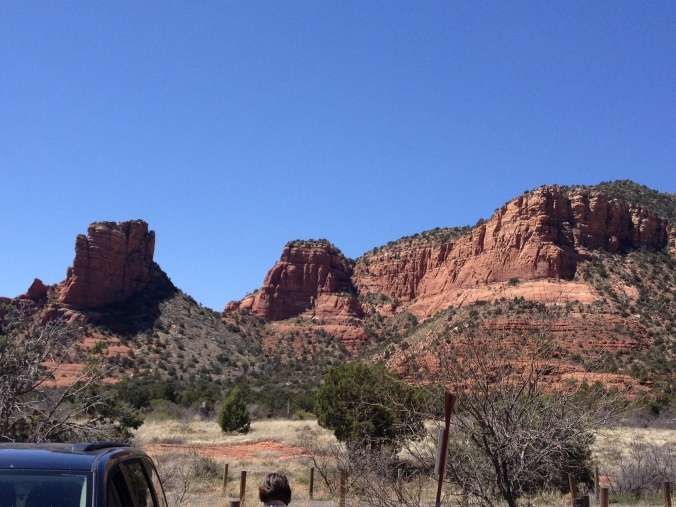 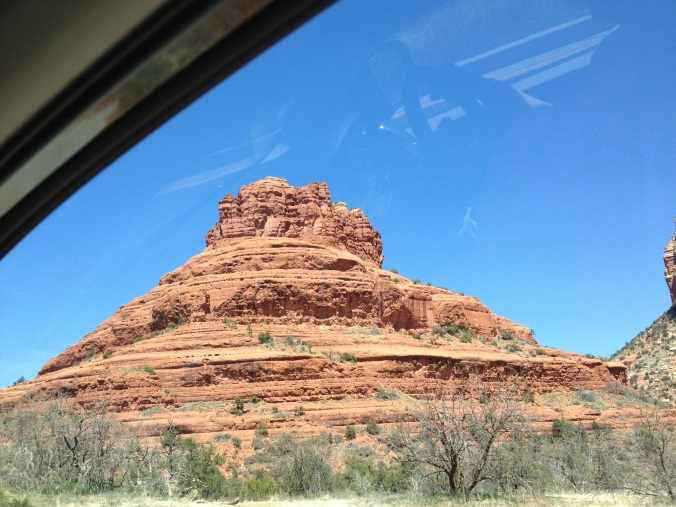 I wanted to stay here for days and explore, but since this trip was more about Gabriel than about me, we moved on after eating lunch at a two-story Burger King with the most amazing view!

Walnut Canyon: Where I nearly died of fear about 1000 times in the span of one hour

So… here’s the thing about me and being a mom… I wanted to do what my kid wanted to do, and I didn’t want to be the kind of mom who told her kid no because of my own fears. Having said that, Walnut Canyon is not for everyone (my mom stayed in the ranger station and I DO NOT blame her one bit!). The visitor center is very lovely and you can see some beautiful views from their floor to ceiling windows, but that’s not what Gabriel wanted to do…

Walnut Canyon has a couple of trails that you can take, one that is paved and relatively flat, and one that requires going down into the canyon via a group of 240-step winding stairs. Before getting to the stairs you read quite a few signs warning about strenuous return trip and the limited (and dangerous) accessibility ahead.

Once you get down into the canyon there is a gate… like a point of no return… because the trail is so narrow it is one-way only.  It is so narrow that in most places it was more narrow than my hips, no railing, and a gloriously awful looking “plummet to your death” kind of drop-off. My knees were literally shaking on the mile (or so) loop around the cliff dwellings.

The upside? Too many to count! You actually get see and GET IN the cliff dwellings and see how the people of long ago lived. It was fascinating. The view was so beautiful (as long as I pretended I couldn’t see down.

Gabriel was SO excited! He walked bravely on the trails and was not phased one bit by the height or how close he was to scary-scary-bad-death. And through my gritted teeth and trembling knees and hands (and heart), I began to appreciate the trip around the cliff dwellings because of my son’s joy.

As a National Park Service Junior Ranger you learn about lots of things concerning the parks, one of which is that you do not take ANYTHING from the park other than what you bring in. So Gabriel asked me to take pictures of about twenty different rocks that he wished he could take home with him (how adorable is that?). 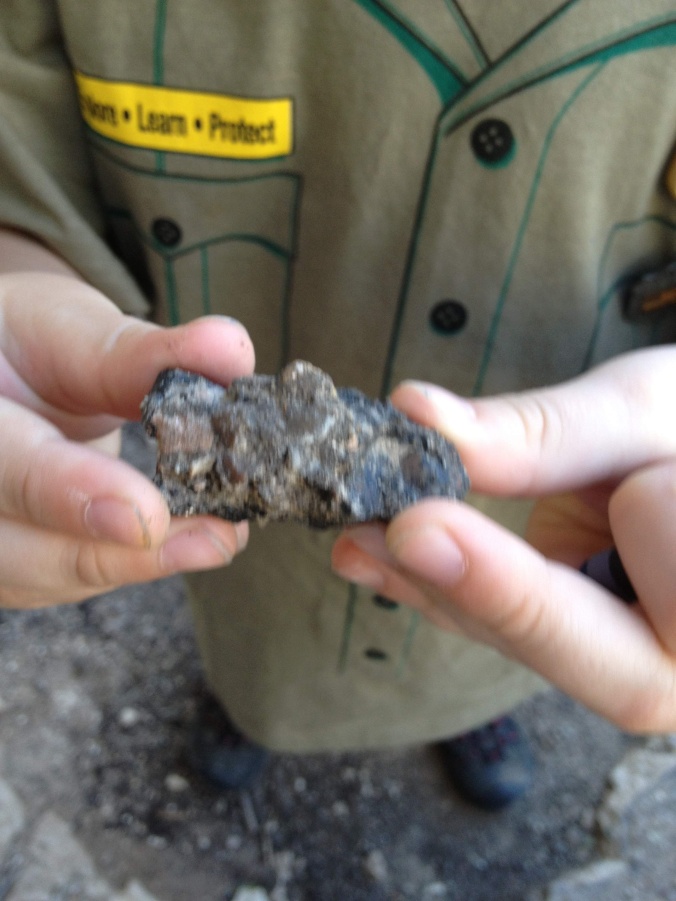 I only included one rock picture 🙂

Cliff dwellings to the left, scary-scary-death to the right

One of the few places where the trail was almost wide enough for me to not be afraid, but keep in mind where that ceiling is… and I’m 5’2” on a good day. 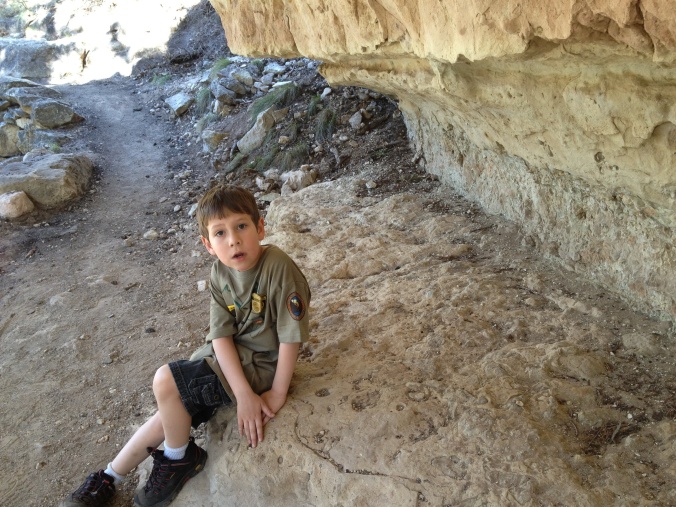 Gabriel telling me (and other families nearby) about the history of the people who lived in these types of cliff dwellings.

The trip back up, was a challenge, but we made it all without stopping because Gabriel wanted to “get back to Nanny so she wouldn’t be worried.” All in all it was well worth the fear and trembling. Not only was the view beautiful, but my son got to experience something he’d being researching for weeks even though his mom is a wimp.

When all was said and done, he had a few more badges to add to his backpack! 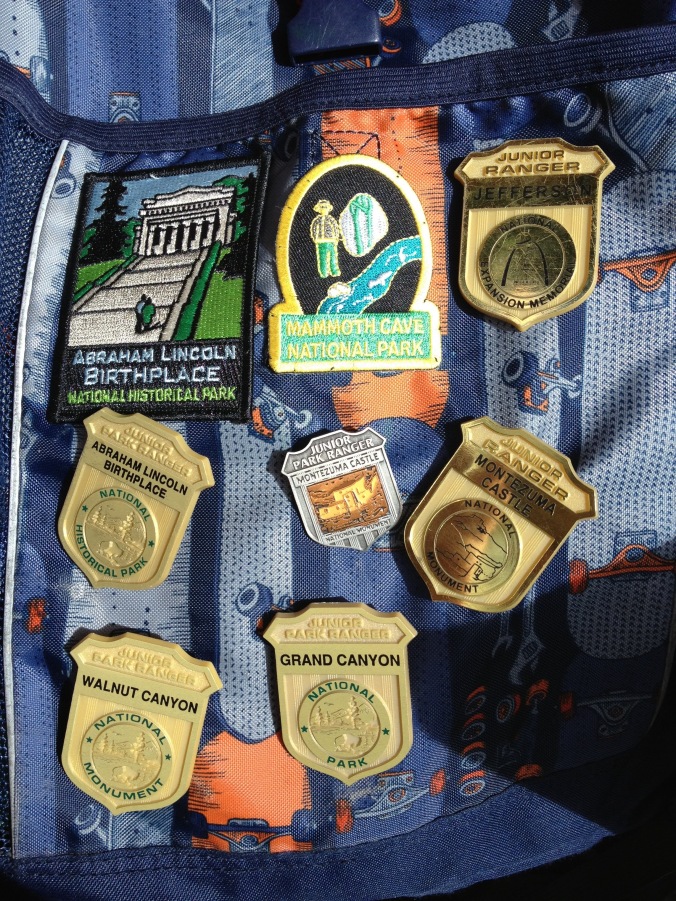 If this is your first time to the blog, don’t miss out on our other adventures here:

8 thoughts on “There’s more than a canyon in Arizona!”