Several weeks ago I began sharing with you the adventures that my son and I have taken together over the years. We started our travel adventures when he was in the first grade by going to St. Louis, then later that same year we went to Mammoth Cave and Lincoln’s Birthplace National Historic Site. Two weeks ago I continued with one of our bigger trips, all the way to the Grand Canyon.

Today’s blog recounts our first full day at the Canyon.

We woke up early that morning so we could get to the Grand Canyon’s supply store as soon as it opened so my father and his buddies could get the supplies they couldn’t keep in their luggage.  They wanted to get as early of a start as possible for their rim to rim to rim hike (south rim, down into and across the canyon, up the north rim, and then the return trip). We then took the group to the trail head and snapped a few pictures before they set off on their adventure.

My dad with his gear

After wishing them luck, Gabriel, my mom, and I went off to the ranger station to get Gabriel’s workbook so that he could get his Junior Ranger badge and add it to his growing collection. Once we had the workbook, we were off to the rim to discover what the Grand Canyon was all about.

Several things … nearly everything, in fact… surprised me while we were at the Canyon. For one, I was not anticipating it to be so cold at the Grand Canyon. My midwestern mind knew we were in Arizona and Arizona is hot, right? I’d been to Phoenix several years before and it had gotten up to 124 degrees Fahrenheit one day. But at the rim of the Canyon (a much higher elevation than Phoenix) it was actually quite chilly, hovering closer to 30-40 degrees in the morning.

Another thing that surprised me is how much my fear of heights (acrophobia) would bother me while we were there. Now, I’m no dumby, I knew the Canyon was big and deep, I’d just assumed it would be more of a gentle sloping kind of height, or that there would be a guardrail at the least. Nope!

My fear kicked in pretty quickly as I tried to keep my fearless child from plummeting to his death every ten minutes! Of course I am exaggerating, but I had been completely clueless at how open the Grand Canyon would be for the more adventurous of humans (not me). And Gabriel was loving the views and was even transfixed with bugs (that we also have in Indiana), and keeping up with him and making sure he was in no way close to the edge was a full time job, it seemed.

I’d made a little formula for how close I could get to the edge and still feel safe (yes, that’s how crazy I can be when it comes to heights). I decided that I needed to be my height (a bit over 5 feet) and a few feet extra in order to be safe (just in case I rolled while I fell face first?).

That didn’t last long with Gabriel, but luckily for me, we were also with my mom who seemed slightly more rational than I was about the proximity to the edge of the canyon. She would brave closer with Gabriel, while I turned away… because somehow that kept them safe (I don’t know, but it made sense in my mind). 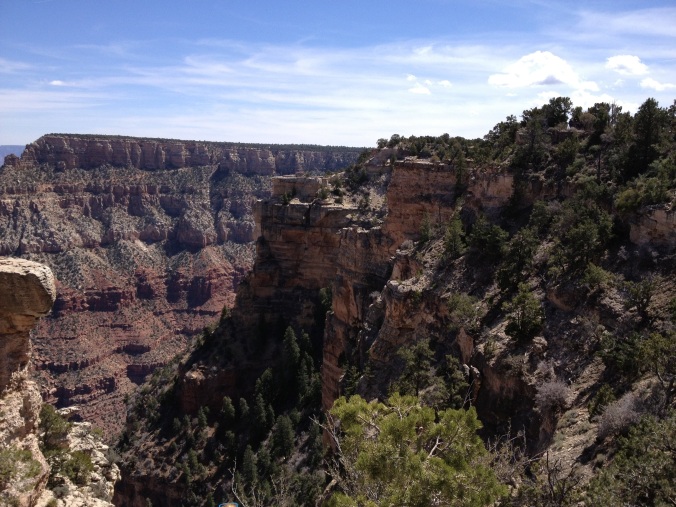 One of our first views of the Grand Canyon

The other thing that surprised me about the Grand Canyon was the massiveness of it. Of course I knew the Grand Canyon was… well, grand! I just didn’t have any frame of reference for what that meant. I was continually frustrated that my camera could not capture how massive it was. Every picture I took was amazing, but the pictures are NOTHING in comparison to the reality of the Canyon. It was beyond anything I’d ever known before.

In the pictures the colors are not nearly vivid enough, the scope not nearly broad enough. But I tried to capture what I could in my mind as we went around to some of the places we needed to see for Gabriel to be able to get his Junior Ranger badge work completed.

We learned many fascinating things about the Canyon, the habitats, and the wildlife surrounding it. One of the interesting facts that I still remember is that the only place that you can see the Grand Canyon all at once is from outer space! Even in an airplane, you can’t take the entire Canyon in at once… it’s too big! You have to be out of Earth’s atmosphere to see all of it at the same time. DUDE.

Always ready for a picture

Canyon selfie (at a safe distance from the edge)

Once we’d filled out the workbook for the Junior Ranger badge and completed the necessary tasks (like picking up trash that others rudely left behind), we went to a ranger station so that Gabriel could get sworn in. The Canyon (unlike the other parks we’d been to) swears in several kids all at once just due to the volume of kids getting the badges, but it was still a very cool experience, and again, one that Gabriel almost felt he wasn’t “good enough” for.

Signing his name to his certificate

The Grand Canyon has several restaurants in the park ranging from relatively cheap cafeteria style to very fancy sit-down places that have incredibly expensive food. Since the Canyon isn’t near any large cities, the park has everything you could need for an extended stay. There’s even a Catholic church in case you need a little Jesus with your nature.

Our lodge was outside of the main village (with several hotels, stores, and restaurants), but was just a quick walk away from the rim and a few convenience-type stores. In the evening we went and got some coffee (not Gabriel) and watched the sun set over the Canyon. There were tons of places to sit around outside and Gabriel especially liked the carvings in the stones of several different local birds.

Showing off his own wingspan

Our Grand Canyon adventure will last a few more weeks. Next week, join us as we drive around the park and see a few very cool places on the south rim!