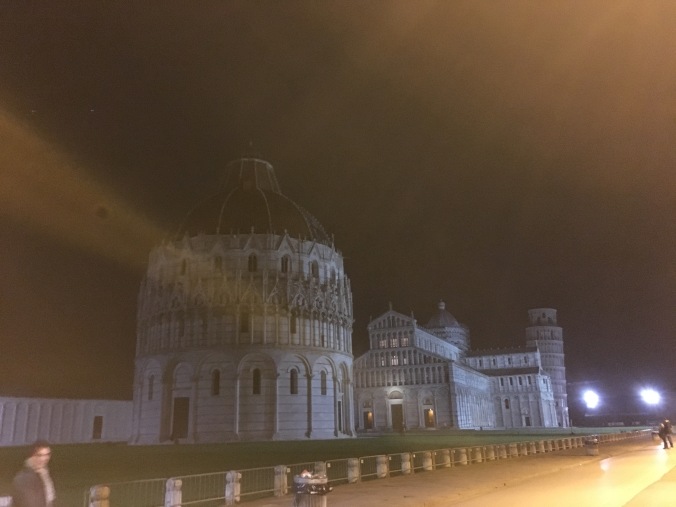 On the epic trip that EF prepared for us, we were not “supposed” to go to Pisa. However, after we requested a side trip, our tour guide agreed to take us the Friday night after we had been in Florence.  I nearly didn’t go because it was an extra fee to pay the bus driver and a tour guide when we got to Pisa. However, since all the group was going, I decided to go as well… and my life is better for having gone.

We arrived in Pisa after dark, and like all of Italy, it was breathtakingly beautiful. Our tour guide met us by the baptistry (see my Florence post about the significance of the different buildings). She there gave us a brief history of the bad soil in Pisa that caused not only the bell tower, but also the baptistry to be slightly tilted.  People don’t often know about the baptistry because the tower is much more tilted. 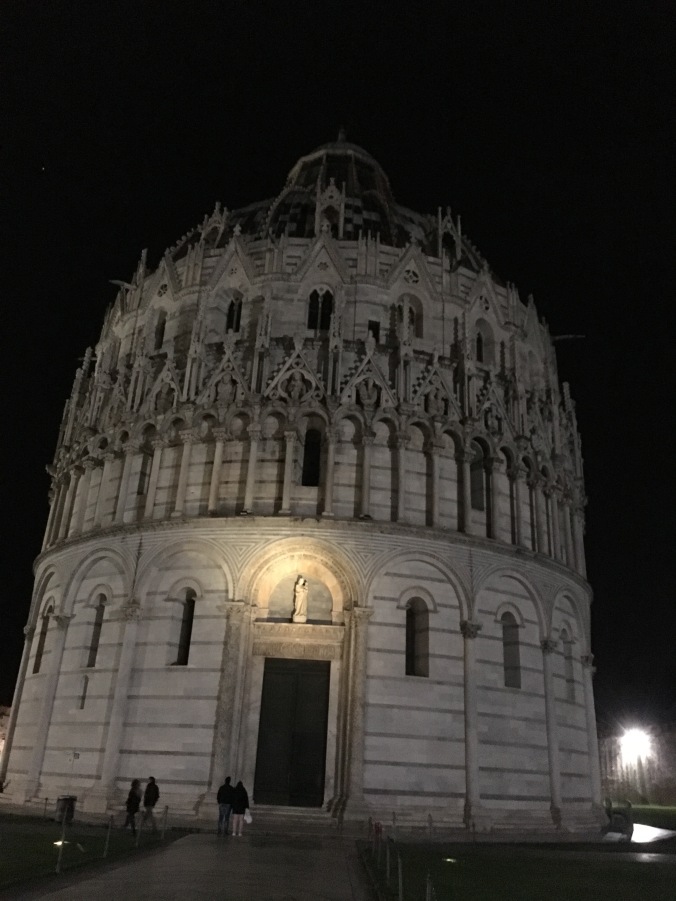 Because it was Good Friday, there was a quiet hush over the area due to actual services going on in the cathedral. Our tour guide even whispered as she gave us the history of many doors on religious buildings in Italy and around Europe. Much of the general populace (during the times the religious buildings were constructed) could not read. So often the doors told religious stories so that the illiterate masses could see them rather than read them.

These are the doors on the cathedral at Pisa, including one of the tiles that apparently has something to do with finding love… that tile is actually shiny from the humber of people who rub it for a blessing/good luck. 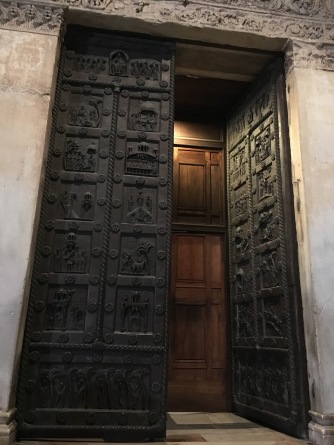 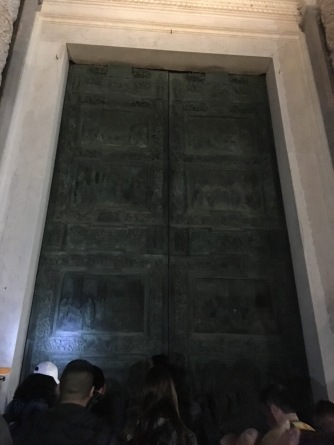 We were not allowed to go inside the cathedral as it was invitation only due to the presence of a very important Cardinal… or something like that. We were disappointed, of course, but it made sense why they wouldn’t want a bunch of American teenagers just bursting in.

So we walked around the outside and over toward the tower where our guide talked to us more about the tower’s history. Apparently, no one wanted to take “credit” for the starting of the tower, so there is some controversy as to who began its construction. It was only two floors high when it began to sink. They took a nearly 100 year break in the construction due to conflict with Florence and other surrounding towns. This was apparently a good thing because it gave the foundation a chance to settle.

The tower continues to sink a little bit from year to year. It was even bolstered up in the late 90s to decrease the degree of the leaning, but it will likely need to be done again at some point. It was quite an impressive sight to see. I’d heard about it, of course, but I really had no idea how dramatic the lean was. It is positively impressive that it doesn’t tip over. The uppermost floors are smaller than the others to reduce the appearance of the lean and also to add less weight to the structure.

As we finished our official tour with the local guide, our main tour guide gave us ten minutes before we needed to head back. However, just a few moments later we started to hear singing coming from the speakers mounted on the outside of the cathedral. At first we didn’t know there were speakers, and it was a very beautiful and eerie collection of voices coming from… well, we didn’t know where.

And then, someone pointed out that there was some kind of procession off in the distance from the direction of the town. At the front of the procession was this very important Cardinal carrying an enormous cross, and people were just falling in step behind him, creating this long chain of people from the town who were all singing the same song that was coming from the cathedral. It was obviously in Italian, so I don’t know what the song was, but it was haunting and magnificent.

The procession went into the cathedral, and everyone poured in… so I did too! I got some amazing video of the procession – the Cardinal, other important religious looking people, civilians, and also first responders (police, firemen, etc). Everyone was singing and pouring into the church… it was positively magical!

I’ve mentioned before in other posts that I am not Catholic, but Italy has this way of making you feel a part of the religious experience even though you technically aren’t. The emotion of it all makes it very understandable that nearly 90% of Italy identifies as Catholic (even though only 36% of them consider themselves devout). On this religious holiday, it seemed as though the entire city of Pisa was in or around the cathedral as we open mouthed tourists stood outside.

I called my parents afterward (my father was raised Catholic) and actually cried as I described the beauty of the experience to them.

I don’t remember how much money it cost me to go to Pisa, but it was worth it a million times over! Pisa is a glorious place to spend Good Friday… and probably regular Fridays too.

4 thoughts on “The Enchanting Magic of Pisa”