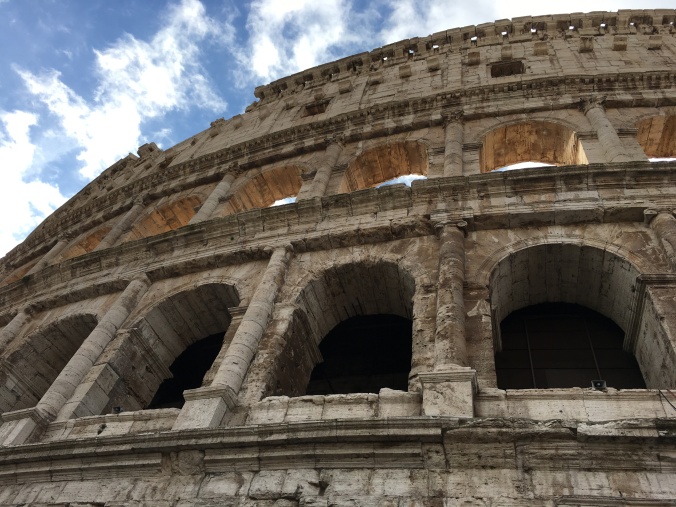 Day two in Rome was unimaginably packed. If someone would have told me we could have seen as much as we did in one day and still have time to eat food, I would not have believed them!

We started out the day at the Roman catacombs just outside of the original walls of the city. Unfortunately you are not allowed to take pictures in the catacombs (flash or no flash it is a no no), and I am a rule follower, so I didn’t take any pictures inside. The catacombs were not nearly as creepy as I imagined miles of underground crypts would be. The stories our guide told us were truly fascinating– from debunking the myths that the Christians hid there to avoid persecution to telling us about the modern Christian symbols that originated as catacomb graffiti to signify to other believes of a fellow Christian. We only saw a very small portion of the catacombs, but it felt like we walked for miles! It’s truly amazing the amount of underground tunneling beneath a massive city.

Once we were outside, we were allowed to take pictures of the the replicas seen below of famous graffiti from the tombs. 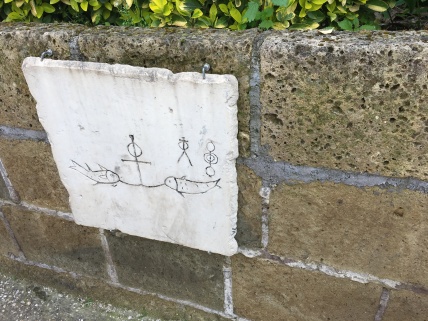 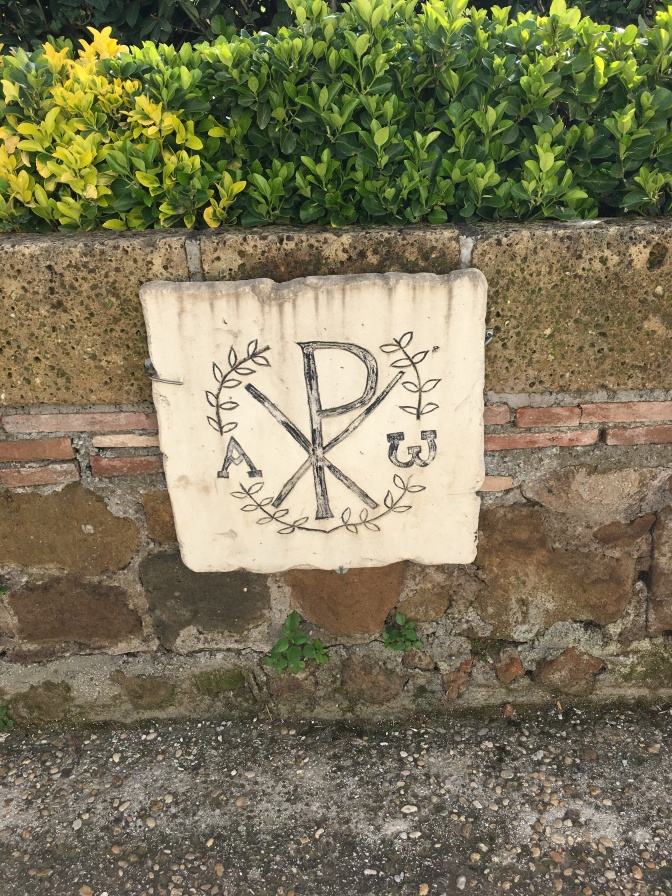 After leaving the catacombs we met up with the rest of our group (who had decided to tour Rome on their own instead of going to the catacombs) at the basilica called Saint Paul’s Outside the Walls – also on the outside of the Roman walls.

I am not Catholic, but this place moved me in a way I did not expect. The beauty of this church was unbelievable! We visited Rome during Holy Week (the week before Easter), and they were prepping for Easter services, and boy… they weren’t holding anything back. Below are a few pictures that honestly do not even come close to doing it justice. 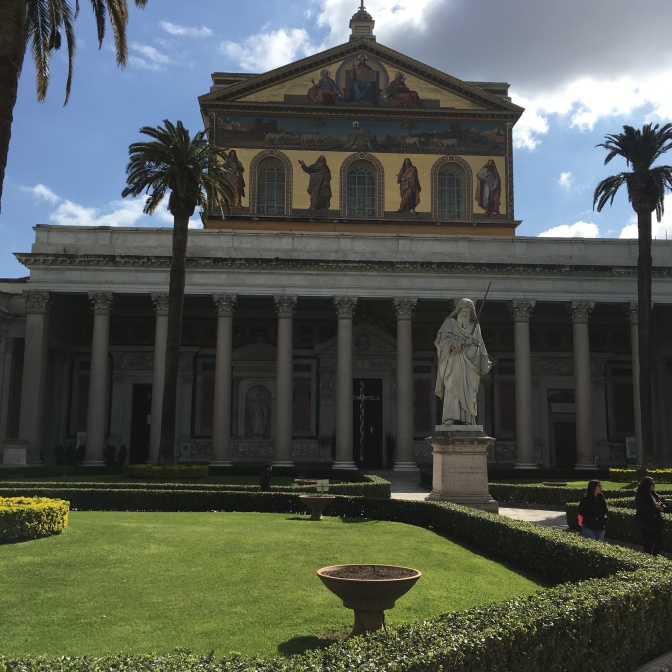 I do not have the words to describe this place. Truly there are none that give explanation to the grandeur of St. Paul’s. The statue of Paul in the outer courtyard is huge – just the podium it rests on is probably 7 or 8 feet tall. The Holy Door, or the door of jubilee (with the large cross on it), is over 12 feet tall and only opened for very special occasions that would probably make more sense to a devout Catholic than they do to me (who is only Catholic if it’s passed genetically).

Also inside (and pictured above) are what is believed to be the remains of Saint Paul of Tarsus. The basilica was purposefully built over the site where Paul was buried after he was martyred. This portion of the tour meant a little less to me since the bones of Saint Paul really aren’t that intriguing to me (especially since no one knows if they really are his). However, the art and architecture of this building are stunning. Gold covered everything, and painted portraits of every pope throughout history line the walls like some kind of gloriously pious wallpaper boarder.

Despite my lack of Catholic faith, my eyes got a little misty as I thought about how amazed my grandparents would be at this place. Irish Catholic, through and through, they would have been stunned by the beauty and history.

The highlight of my day, however, was our third stop for the day: the colosseum. I knew I would love it before I even saw it. Literature and history (and even film) are so intertwined, that the colosseum has been something that has always fascinated me. And like everything else on this trip, the colosseum blew me away. I am not embarrassed to say that I wept a little as we toured the corridors and looked out upon the city. The stones, the steps, the passageways, and the intensely vast opening of the arena are wrought with history and legend and rugged beauty. Though some may not see the crumbling ruins of such a dark place as beautiful, as I touched the walls my mind swirled around the history of the place. That I, Allison from Indiana, was standing there where people before the time of Christ stood watching magnificent and gruesome battles carried out. Just writing about it gives me chills!

My only slight disappointment was that I did not realize that there was no longer a floor. I imagined, as I was planning for the trip, that I could walk out into the middle of the colosseum, raise my hands and shout, “ARE YOU NOT ENTERTAINED?” at the top of my lungs in a glorious moment of camaraderie with Russel Crow in The Gladiator. However, since the floor was made of wood, and would need to be continually replaced over the years, they leave it open so that you can see all the hidden jails and trap doors that make the colosseum so ominous. There is a small portion where (for an additional fee) you can walk out a few feet, but that just wasn’t going to be the same, so I didn’t waste the Euros.

Next we traveled a short distance to the Roman Forum, which was also very interesting. At first I didn’t particularly want to go. And yet again, I was surprised by what I had thought would be boring. The Roman Forum was a hub in ancient Rome. Business took place there, politics, and even the assassination of Julius Caesar. 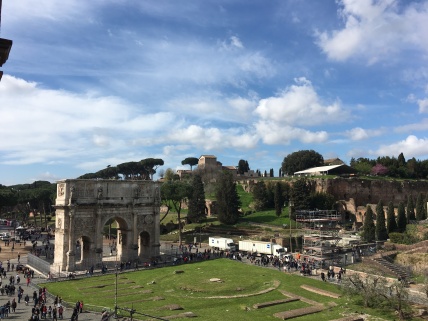 Believe it or not, we did all of this before having lunch at an adorable pizzeria just a few blocks from our next country – Vatican City! Stay tuned for next week’s post on more about that visit.

5 thoughts on “Rome Wasn’t Visited in a Day”